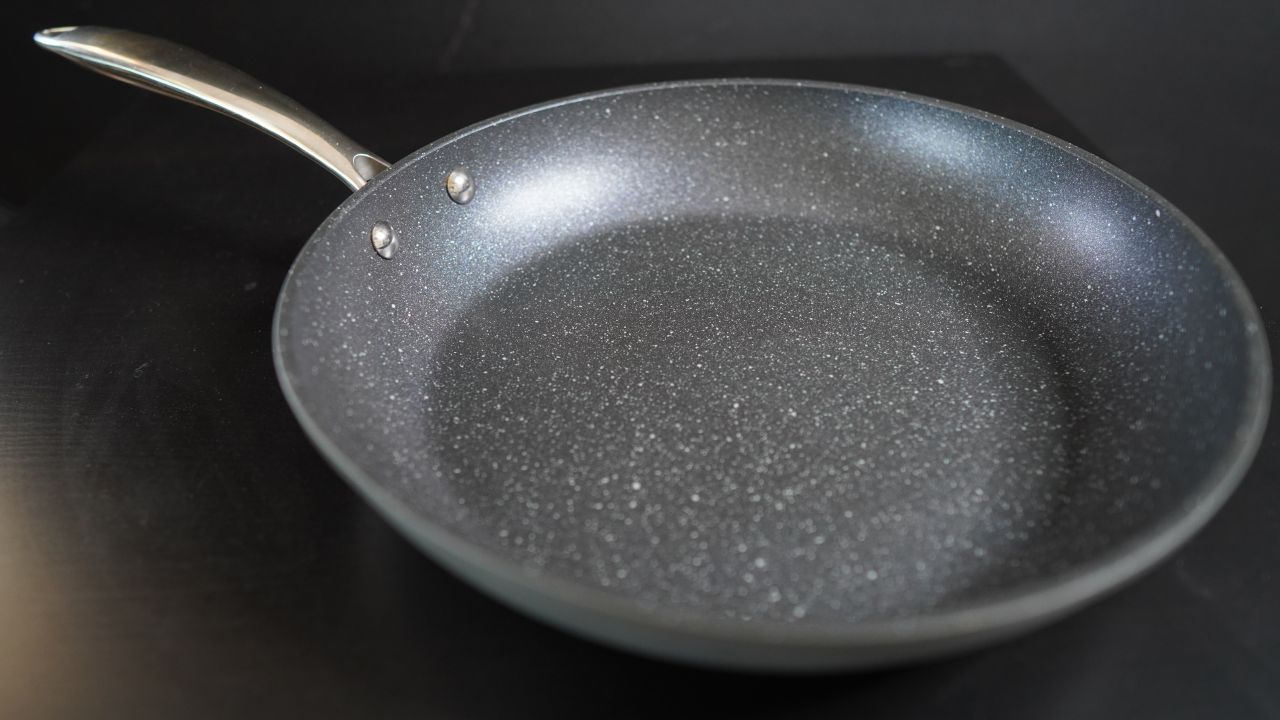 Today I’m taking a look at the new Pro Series pan from the Granitestone brand to see how it works and how it compares to the original.

As of this writing, the best place to buy the Granitestone Pro Series is direct from the website (link). I managed to obtain the coupon code “JAMESWHITE” from the company to share with my readers, which will take 20% off your order. I have not seen this on Amazon yet but will update this space when I do.

Although I don’t profess to be a culinary expert, I have reviewed my share of pans over the past few years, and probably the most common question I get asked is, “What is your favorite pan?” Since 2018 that answer has been, “The Granite Rock pan.” Today I’m taking a look at the newest version in that line, which was renamed GraniteStone not long after my review of the original incarnation.

I’ll refer you to my original review of the Granite Rock pan if you are interested in that particular pan. Suffice it to say that I was impressed with the performance of its nonstick surface when I originally reviewed it, and I have been equally impressed that it has managed to stay in like-new condition ever since. When I found out that a new offering called the Pro Series had just been released, I knew I had to give it a shot.

Although I had no complaints with the original pan, I was curious to discover than numerous improvements had been made in this collection. The pan is much heavier and sturdier than the original, and it is considerably thicker. An aluminum plate has been added to the bottom which allows the pan to be used with induction cookware. That was not something that mattered to me with the original, but several viewers and readers had inquired about that, so I’m sure this will be a welcomed addition to those consumers. Finally, the handle has been re-tooled. The original handle was flat and thin, while the new handle is considerably thicker and more rounded. This allows it to disperse heat better and remain cooler.

The packaging is quite clear that seasoning must be performed prior to the first use. This merely requires a little oil and a short time in the oven. After that, the pan is ready to go.

I performed several tests on this pan in order to see how well it compares to the original, and how it works in real-world cooking tests. I first tried a regular fried egg with no oil or butter and, as with many nonstick pans I’ve tried in the past, it did not stick at all. I wanted to give the surface a more challenging test, so I duplicated my burnt marshmallow test that I did with the original. This entailed burning marshmallows in the pan and then turning it upside down. The marshmallows fell out, but some of the burnt material remained behind. After letting that cool, the remaining burnt marshmallow easily scraped out with a plastic spatula.

Perhaps the most impressive test of the nonstick surface entailed melting caramel in the pan and then letting it set for 24 hours. I wondered if perhaps this was too difficult of a test for the nonstick surface. At first I didn’t think the melted/hardened caramel would come off, but after a few scrapes with a plastic spatula, both pieces popped right off.

I use the pan for a couple of weeks before writing this review, and some of the items I cooked in it included chicken, sauces, bacon, and shrimp. During none of my tests did the nonstick surface fail to perform. Perhaps more impressive has been the cleanup. In most instances I was able to almost completely clean off the pan with just running water. A light wipe of a sponge is all I needed to clean it off, regardless of what was caked onto the surface.

Overall, I think the GraniteStone Pro Series is a fine addition to the brand’s line of cookware. I don’t know if the surface is better than the original, but it is certainly as good. When you combine that with a better handle, more durable material, and induction capability, this pan should definitely be on your short list of pans to consider. As of this writing, it is only available as a two-pan set, which costs about the same per pan as the original, so I feel like the cost is quite reasonable.

Below you can find my full video review. Below that is the original Granite Rock (before it was renamed) review, along with a re-test after one year of use.

Have you used the original Granite Rock or any of the new GraniteStone pans? Tell me what you think in the comments below.

Great review. I use cast iron which is also non-stick when seasoned properly and cleaned properly. I am impressed with these granitestone pans. I wonder if they would outlast my cast iron ones.

That’s a good question! I don’t know if anything can really outlast cast iron, though. These pans just seem perhaps a little lower maintenance and lighter weight than cast iron. After two years of regular use with the original Granite pan, I’m thinking it might last longer than the typical nonstick pan.

Sad, it is only in the USA availible

I’m totally getting these; just wish there was a cool square version like yours!

Btw, did you give them permission to use your vid for promotional purposes?

I do like the square design as certain items seem to fit in there better.

And I don’t mind if they embed my video on their site. It’s when people put clips of my videos in their ads that I object.

I have been looking for a new set of pots and pans. I am so impressed with your fair, thorough review of these, so we purchased a set after looking for quite awhile for a new set! Can’t wait to receive them and I must thank you for the great discount code! Really appreciate all you do! Thank you!

Happy to help. I will be curious what you think of it!

So after using these for a few weeks, I have to say these pro pots and pans are excellent to use! Easy to clean; easy to cook in and even cooking. The non-stick surface works incredibly well and even better with just a small amount of oil. Heavy, sturdy and well made pots and pans. The stacking is wonderful to save space, even two lids stack conveniently on the pots and pans to save even more space! The handles stay cool on this pro series. I did receive a bent stock pot with my set and customer service was very responsive and easy to work with!  They… Read more »

Thanks for the info JoAnn, and I’m glad you’re enjoying them!

How about an Amazon link? Sure would like to give you the affiliate link dollars when we buy this. Found it on there for about $42 but on the website it was over $50 even with coupon code. 🙂

Hey Nikki! Are you sure that was the Pro Series you saw there? I asked the people at GraniteStone about Amazon and was told it wasn’t there yet. I just looked and didn’t see it, but if you did I’d be curious to see!

At what temp and for how long did you season your pans? The instructions that came with mine make no mention of seasoning.

I have been looking for a new pan with good reviews. I will try this one.
Thank you for doing the review it is helpful.
﻿

I was wrong the code does still work. Just have to make an account and log-in.

They do not package pans very will. There was no damage of the box.

Here is the pan. Still trying to contact someone. Their chat don’t respond. Even when the Chat window saids:” We reply immediately “ 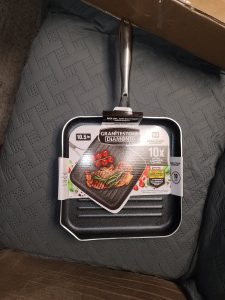 I ordered mine 14 days ago, they never shipped it out and wont respond to any of my messages

at least you got the right pan, they sent me Gotham steel copper pan 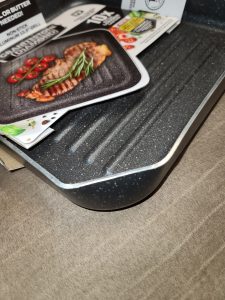 box. They did not even wrap the pan in the bubble wrap.

They don’t have a phone number to call anyone. 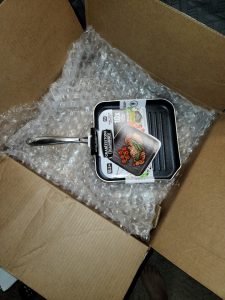 1st- Thank you for the Phone number.

They replace it . no problem ( in the mail now )

Got 20 pan set, grill pan,egg pan and 6 knives.
shipping a little slow. but, it fine.

I’m planning to buy the pro set next. They look heaver duty.

Glad I could help. Good luck!

hey James, I used that link you put on the top of this page that goes directly to the website, and it turns out it’s a phony website, charged me, never shipped it out and wont contact me back… I spoke with granitestone and they said this is not their website. it’s been weeks and I cannot get in touch with them and my order never shipped

I’m not sure what link you are referring to but I have confirmed that the link here is accurate and does land on the official Granitestone website. If you could tell me what link you clicked, I can investigate further.

the one from at the top of this page, that you linked in. I’ve emailed them several times from the linked website and called multiple times to leave a message because it tells me no one is available to take your call and has you leave a message. I ordered about a month ago now and haven’t heard anything after multiple attempts to contact them. I’m going to go to my bank if i don’t have them contact me and try to get my money back. and from what I’ve seen, there are multiple distributors of granite stone and different… Read more »

they still have never replied to me or sent my order. just FYI I’m going to my bank to try to get a refund

I contacted the company and they suggested using the live chat on the website. Perhaps worth a shot to get it straightened out.

I just ordered and used your coupon code JAMESWHITE and it took off 25% not 20% so even better! Thanks, I can’t wait to start sliding some eggs!

Not sure what happened, but I won’t tell!

I ordered the granite Stone pro, they sent me this instead and they wont answer my emails or calls…

Go to granitestone.com, open the live chat, and you should get someone who can help.

I did, it said all messages are being forwarded to their email until the 28th. I did that thismorning and haven’t recieved a response yet.

Hello. I was wondering if you could update us on how the pro series is doing after so long? I’m looking to purchase a set of cookware, but I would like a set that lasts a pretty long time. Also, would you be willing to review their other pan sets? I’m mostly looking at the stackable ones. Thank you in advance – Kai

Hey Kai! I just posted a video of the Ninja Neverstick pan and you can see the Granitestone Pro being used in that video: https://youtu.be/sri5zeIe7Dc

Overall it has help up quite well after nearly a year. I use it several times a week and have seen no discernible degradation. I’m still quite happy with it. I’ve looked into some of their other offerings, which I will probably review a bit later this year.