Scrubtastic is a 300 RPM cordless rechargeable scrubber that makes cleaning easier. Does it work? Read our Scrubtastic review.

Scrubtastic is an electric scrubbing tool that allows you to effortlessly clean your bathroom without effort. The official product website was originally buyscrubtastic.com, which was registered in August 2016. By 2017, an association with Clorox was formed and the official site now appears to be cloroxscrubber.com. You can see screenshots below of the official website taken in October 2016 and in March 2017. Note the lack of the Clorox brand name in the earlier snapshot. Scrubtastic from October 2016, before being branded under the Clorox name. You can get Scrubtastic for $39.95 with free shipping. A second unit can be added for another $10. There is a 10-year limited warranty.

I found Clorox Scrubtastic at a local mall in a store called Kitchen Collection, for $39.99.

Note: When I  first took a look at this item in October 2016, it was simply called Scrubtastic. By early 2017 it had been re-branded “Clorox Scrubtastic.” It doesn’t appear that anything about the device has changed, including the price.

Scrubtastic is a cordless, rechargeable bathroom cleaner. Its 300 RPM spinning action and extension handle will allow you to tackle troublesome cleaning tasks around the bathroom. Several different cleaning heads are included, giving you the opportunity to fine-tune your cleaning job.

To use Scrubtastic, you simply choose your desired cleaning head and press a button. You can use it as a smaller handheld cleaning device, or use the extension wand to stand while cleaning.

It should generally work as advertised, although you should probably keep your expectations realistic. Most powered handheld scrubbers like this do a pretty good job for mild to medium cleaning jobs, but require significantly more pressure on tougher areas. The extension wand is a nice touch, although it can be awkward while exerting pressure on places like the wall of a bathtub.

Scrubtastic is effective on tile. You can use Scrubtastic on windows. I was happy with the results after using Scrubtastic on a shower door.

Bathroom scrubbers are a perennial favorite among As Seen on TV advertisers and the buying public. In recent months I’ve evaluated several such products, including Hurricane Spin Scrubber and Turbo Scrub, which offer many of the same features found in Scrubtastic. It is perhaps due to the popularity of those products that Scrubtastic has been re-branded as Clorox Scrubtastic. There is very little visual difference between these three items, from the “300 scrubs per minute” to the inclusion of a dome, flat, and corner brush.

Overall, I think consumers will generally like Scrubtastic. Those will realistic expectations will likely be the most satisfied customers. For mild to moderate cleaning jobs, Scrubtastic should be more than sufficient. Harder jobs may require some elbow grease to make a dent.

Besides Hurricane Spin Scrubber and Turbo Scrub, perhaps the most popular alternative to Scrubtastic is the Quickie Tub N Tile Power Scrubber. That product also features a rechargeable design, extension handle, and two different heads. It currently holds about a 4 star rating among hundreds of consumers.

Below you can see a comparison of Hurricane Spin Scrubber and Turbo Scrub.

Have you used Scrubtastic? Let us know what you think by leaving a comment below and a star rating above.

This would work awsome with another pad like they have on their toilet scrubber. More of a pad than brush. Design is great but could use this improvement.

TY Anthony. Going to buy the Clorox one right now. Watched both of the reviews.

I got my scrubtastic earlier this year; I live in Kissimmee Florida, and I needed something to clean my master bathroom shower and sliding glass doors. It worked very well a few times, but I recently went to use it and it turns out that water got inside it and it no longer works. So, as far as using it with water, I did not get such a good value for the money 👎

It would be nice to have the attachment like on the toilet scrubber. That already has the Clorox cleaner in it. Just add water to activate it.

Yes. I decided to give it a try and was pleasantly surprised. The only drawback is that it’s difficult to use with the extension shaft in place. I bought an extra set of brushes so I have one for the bathroom and another for the kitchen. I sanitize the head by spraying it with an antibacterial cleaner. I’m going to try it on some pots and pans this aftrnoon, Will post results. Also thinking about using it to scrub exterior window sills.
It’s well worth the money. 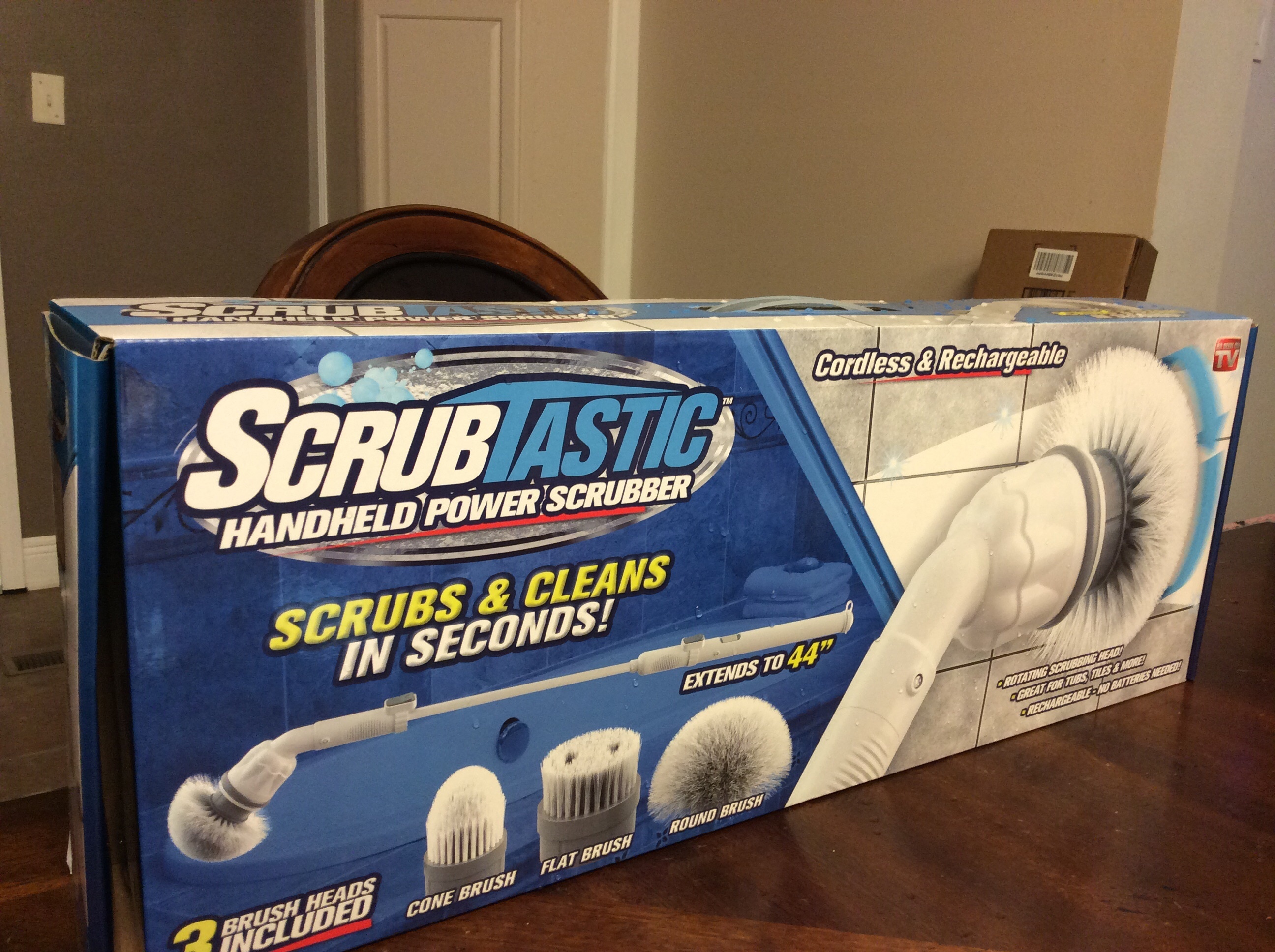 I would like to contact the company that makes them. I got this as a gift and its sucks. The battery doesn’t last at all. I want their money back, so I can give it back to them. (It was my grandmother)

I got Scrubtastic for Christmas. I am returning it. It doesn’t stay on…I have to keep stopping every 30 seconds to adjust the handle or give it a whack to get it to stay on, maybe its just a dud, but not a good value for the money. I didn’t notice the grout in my shower looking any better than usual. I thought it would save my back but my back still hurts as I have to lean over…and actually seem to have to work harder at cleaning! This item doesn’t work for me. I am just not impressed!

I haven’t used mine yet but will this week. When i was ordering it I had the chance to get a faster unit for $20 more which I accepted. However when my units arrived neither unit says anything about being faster and the boxes are identical to those for the basic units. I called customer service and they gave me some numbers and said this told the warehouse to send me the deluxe units. I lost $20.

I saw the “Deluxe Scrubtastic” advertised on TV as a special offer of 2 for $39.95 (plus $10 S&H). But before I could order it, that offer vanished, so I ended up ordering just one for that same price. It worked fairly well on mild to moderately dirty surfaces. After approximately 8 uses, it failed — absolutely nothing happened when I hit the “on” button, despite being fully charged. I contacted the company in early Feb. of 2021, and was assured that, if I would return the defective device ($15 postage, my expense), they would replace it. No replacement arrived,… Read more »

Where did you order this? The official site by Clorox no longer works and I haven’t seen this in stores recently.